NGESONG STEPPIN OUT IN STYLE
“Pippa”

Angie takes her 1st group (and ours) then proceeds to grab

Harley came to us from our good friend Moya in Brisbane, a sable and white male who is extremely proud. He goes about his business on show days with dignity and due diligence in the ring, he has won a lot of hearts. This young man is a softy at heart and loves nothing more than laying at my feet or on my lap getting patted, where you’ll find him most times. Harley is a father now for the second time and takes it upon himself to check on his offspring when he hears any noise from their sleeping area. There are more future stud duties in line for this young male. 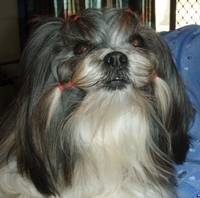 Sam is a confident young man not taking a backward step, he is eager to please and training him has been very easy and a delight. He enjoys the show ring, that has been proven by the way he enters the arena and struts around as if he owns it. He is maturing quite nicely. Recently beating all comers in a hotly contested Junior in Group line-up (all others were full Group Winners over the previous 4 shows)

It is with sad news I must report that Sam has now retired (12th Oct.2010) and gone to a fantastic forever home with children. I miss my Big Boof Head, but I had no choice in the matter, council rules. Thanks for the memories Big Boy. I always will love and miss you.

Crack the Champagne, this naughty boy  Storm took his tally of points to 110 on the 26/27th May 2012 grabbed his Australian Champion Title with the usual, you doubt me ??? then watch me preform

Storm has gone on a show tour to NSW for a couple months & is staying with his breeders at Sooquan. He will campaign the Lhasa Specially Show as well as the Sydney Royal plus the Canberra Royal in 2012. He will return home to us in time for Zone 3 Qld season start.

(we are awarded them here in the far north)

Storm takes the North by (excuse the pun) by Storm

fantastic achievement, he loves his walks & training. Storm is eager to please as long as he gets his cuddles when he does right, the tail doesn’t stop wagging when he is enjoying himself.

Is LeBron the most durable athlete of all time? 👑

Reigning NRL Premiers, the Penrith Panthers will host Super League champions St Helens in the World Club Challenge on Feb 18 with the winner walking away with $100k 💰

Watch it LIVE and exclusive to Fox League, available on Kayo.